It seems that neither I nor anyone I know remembers who was head of the FBI in Arkansas before I.C. Smith. That is because, historically, Arkansans never heard or read anything about the head of the FBI — they kept a low profile. They did not grant media interviews, appear in photo ops and fluff newspaper pieces, nor pen guest writer articles in the newspaper. Not until Waco, Ruby Ridge, etc., and the case closest to my heart, the “Train Deaths”, and not until I.C. Smith came to Arkansas. Smith is obviously waging a very public and private PR campaign which includes lies and innuendoes about me and my dead child, Kevin Ives. It is evident from the smear campaign that Smith has launched against me that he considers me a grave threat, as well he should. There is no greater foe than a mother whose child has been mistreated. Smith’s strategy is strikingly similar to that of a sleazy criminal defense attorney who has no defense for their client — so they assassinate the character of the victim insinuating they got just what they deserved.

After being led to believe that arrests for the murder of my son were coming, I was outraged after my meeting in November, 1995 with Bill Temple, # 2 man in charge of the FBI in Arkansas who told my husband and I that “it was time we considered the fact that a crime had not been committed”. I decided to go public with the story and discussed the events with Chris Ruddy, a national reporter who did a story on it. Obviously smarting over the bad press, Smith, who had never even spoken with me, granted an interview with the Benton Courier, our little local newspaper, and stated that Temple “would never have made such a cold-hearted statement” to me. This is the same thing as calling me a liar. Amazingly, Smith now routinely makes that same “cold-hearted” statement to callers who have visited our website and then call him to demand action on the case.

Unfortunately for Smith, we got over the accidental ruling hurdle 9 years ago after a second autopsy was performed and a county grand jury ruled the deaths murders. Smith certainly has no medical credentials, so who is he to question the findings of three forensic pathologists and 7 forensic homicide investigators with an accumulation of over 100 years experience in homicides who all agreed it was clearly murder?

In that same Benton Courier newspaper article, Smith claimed that the FBI had not decided whether or not to open a case file on Kevin and Don because they did not know whether or not the FBI had jurisdiction in the case. The truth is, the FBI began investigating the case in December, 1993, if not sooner, when an eyewitness came forward placing Dan Harmon on the tracks the night of the murders. The FBI immediately placed the witness in protective custody and told John Brown that the witness’ testimony corroborated part of what they already knew. They also instructed John Brown to turn over his entire case file to the FBI, which he did. So who is the liar? Does Smith really expect the public to believe that the FBI would spend nearly two years investigating a case when they didn’t know whether or not they had jurisdiction? In a direct contradiction to his own previous statements, he now claims that the case is still on-going, but in the next breath, tells people he is not convinced the boys were murdered! So why would the FBI investigate an accident for nearly four years? Obviously Smith is not accustomed to dealing with an informed public. Thankfully, the internet has armed the American people with the powerful weapon of knowledge.

In conversations with some of my supporters, Smith has made outrageous statements for which he is going to have to answer for. For example, he claims that I have accused Curtis Henry, Don’s dad, of being involved in the murders. That is an outrageous LIE. I have NEVER stated that and do not believe that to be the case. Despite some very troubling questions in my own mind for years about Curtis Henry, I can unequivocally state that I have never, ever talked publicly or even privately, about Curtis Henry until he testified as a character witness FOR Dan Harmon in his recent trial. After his testimony, many people were puzzled about Curtis Henry’s support of Harmon and have questioned me about it. My response is that there are many disturbing connections and unanswered questions that need to be resolved. I happen to know that even the FBI was alarmed about Curtis’ public support of Harmon. Perhaps now the FBI will finally ask some questions they should have been asking years ago! Needless to say, I am not going to hold my breath.

Smith also claimed that Larry and I were lax in our supervision of Kevin. I can state with absolute certainty that if you talked to anyone who knows Larry and I, they would tell you that “lax” does not accurately describe our supervision of Kevin. I can also state with certainty that I.C. Smith has no statements or evidence to support his claims. Even if he did, what is Smith’s point? Kevin didn’t deserve to be murdered and my family doesn’t deserve the added trauma of Smith’s mudslinging.

My mistakes are many — at the top of the list was letting Kevin spend the night with Don, but I have no reason to lie. I certainly have nothing to gain, and everything to lose. So who is I.C. Smith? If it looks like a duck, walks like a duck, and most importantly, quacks like a duck, it usually is one. I.C. Smith is a common con-man masquerading as a G-man. I will be filing a formal ethics complaint against him with Washington in the very near future.

Bill Temple told Linda and Larry it’s time for them to accept that no crime was committed. 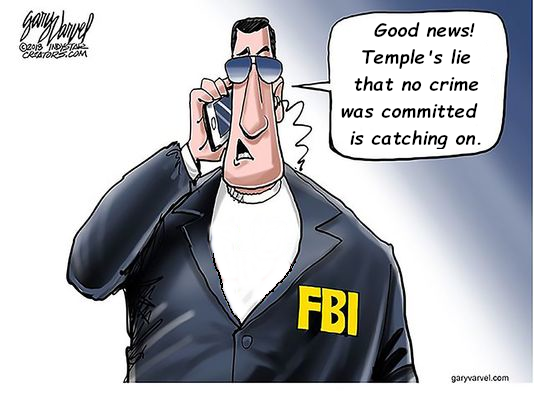 What About Smith’s Early Retirement?

I wrote an update Saturday night (June 30, 1998) about I.C. Smith’s sudden and unexpected resignation from the FBI. It began:

On May 29, 1998, Linda Ives and I met with I.C. Smith, director of the Arkansas FBI. We addressed three issues: perjury charges against John Brown; obstruction of justice charges against Chuck Banks; and new evidence in the “train deaths” case.

Smith made some promises, some excuses, and some revealing statements during that meeting which I recounted in a letter to him on June 29. The letter was posted on our website and sent out as an update.

On July 23, Smith announced his retirement from the FBI.

I offered no explanations for Smith throwing in the towel but had to wonder if it was something I said. I elaborated for several more paragraphs, sent the final draft to our webmaster, Mark, who is also my brother, and went to bed, satisfied that I was continuing to keep our readers informed about the behavior of government officials involved in covering up the “train deaths” case.

After I.C. Smith leaves his west Little Rock office a week from today and the door locks behind him, he won’t get back in. The combination will change.
At midnight, after more than 25 years of service, he will no longer be with the Federal Bureau of Investigation.

Smith has been special agent in charge of the FBI in Arkansas for three years. Thursday, he turned in his badge, a day after calling his staff into a meeting to announce his July 31 retirement.
“I think it’s important that you leave when you still have enthusiasm for a job,” he said in his office Thursday.

Smith, 55, said he started thinking about retirement in June. He decided it’s best to leave quickly after announcing his departure so he won’t face a long wait.

“I haven’t been fishing since I’ve been in Arkansas,” he said. “I brought new fishing gear with me when I moved here that I have never used.”

Smith started in Little Rock on July 31, 1995. On his first day, he told his secretary not to screen his calls, he said. Because of that, he’s talked with hundreds of citizens about their feelings toward the FBI.

“When you are inaccessible, sometimes it takes on a sinister air,” he said. “When you’re open, people realize that you’re real people.”

Smith said he made himself available to journalists for that same reason. He said he avoided responding to reporters’ questions with “no comment” and tried to offer whatever information he could.

He said strengthening the bureau’s relationship with local law-enforcement agencies was one of his most important accomplishments.

“I hope the next agent in charge here is as easy to work with and cooperative as he’s been,” Bradley said.

Smith said he’s tried to emphasize civil-rights law enforcement. He wrote a pamphlet about the FBI’s role in enforcing civil rights, and under his watch the Arkansas office investigated the summer 1996 church burnings, a high-profile civil- rights case.

He also increased the office’s investigation of public corruption, he said.

“We’ve increased the overall complexity of our investigations into white-collar crime,” he said.

“We now get calls every day from individuals who have confidence in the FBI to let us know of things they feel are important,” he said.

The mood in the office turned somber after Smith’s announcement, Sandy Finch, his secretary, said. Others said Smith also fostered openness within the agency.

“I can’t think of an instance when anyone couldn’t walk into his office and discuss any personal problems or problems on their jobs,” Mosher said. “We’re going to miss him.

“I think the man has a near-photographic memory,” Mosher said. “You can talk to him about names, dates and places. He locks in on it, and at a later date he can recall it.”

One of his jobs there was counter-intelligence. He headed an investigation into a Chinese spy who landed a job in the CIA. Smith spent about a year away from the Department of Justice, which oversees the FBI, and went to the State Department, where he helped with security at embassies and protected American officials traveling abroad.

After returning to the FBI, he worked in Australia for more than two years as a legal attache. He taught law-enforcement techniques to police on South Pacific islands.

He displays model boats from Samoa and Fiji in his office, along with other souvenirs.

Smith grew up near Calhoun, La. He was a police officer in Monroe, La., before working for the FBI. He wanted to come to Arkansas in part because family members moved here.

While special agent in charge, Smith experienced two dark days, he said. One came in 1995 when a man he was investigating hanged himself in jail. The other came in 1997 when an FBI truck, along with the guns inside, was stolen in Memphis. That attracted national media attention.

Smith quickly took responsibility, although he was not directly involved. He said Thursday that some FBI employees have been disciplined.
But he wouldn’t elaborate.

He said the hanging and the theft of the truck did not cause him to retire. He just feels as if it is time to go, he said.

Meanwhile, Smith said he will watch the FBI after he leaves. And he won’t be too shy to call with his opinions, he said.