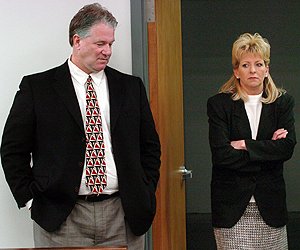 Former City of Lonoke Police Chief Jay Campbell and his wife Kelly Campbell waiting for their trial to resume in this 2007 file photo.

The Arkansas Supreme Court overturned the corruption conviction of a former Lonoke police chief on Thursday, saying a prosecutor took a random set of allegations and wrongly concluded that Ronald Jay Campbell conducted a continuing criminal enterprise in the town.

Prosecutors failed to present substantial evidence to support a conviction, justices said in a unanimous order sending the case back to Lonoke County. The court also said lurid trial testimony that Campbell’s wife had sex with state prisoners at the local jail kept him from receiving a fair trial. Justices also said a search warrant used to obtain evidence was defective.

Prosecutor Lona McCastlain obtained a 78-count indictment against six people in 2006. The arrests rattled the town of 4,300, with claims that the chief conspired to make methamphetamine and that his wife provided marijuana and alcohol to inmates, and took prisoners to her husband’s office for sex.

The indictment said others had inmates do work at private homes, and that the chief and his wife stole antique jewelry and pawned it, and that Kelly Campbell would steal drugs from people in town while visiting their homes.

But the Supreme Court said Thursday that the alleged offenses weren’t linked enough to support a corruption charge.

“Evidence of unrelated criminal offenses does not support a (continuing criminal enterprise) merely on the ground that the offenses were committed close in time or even that they were committed by the same individuals,” Chief Judge James Hannah wrote. He said prosecutors cannot “stack” unrelated charges against a defendant when a jury hearing the cases separately would be likely to acquit.

McCastlain resigned last year to move out of the country. Her successor, Will Feland, could not be reached immediately for comment.

Of the six people named in the indictment, only the Campbells were tried together. Another received probation after pleading no contest to a misdemeanor charge involving state inmates hanging Christmas lights at a private home. Two others had their cases dropped and another ended with an acquittal.

Campbell’s lawyer Patrick Benca said the former police chief would likely remain behind bars for at least 18 days — until the Supreme Court order becomes final. He was being held at an out-of-state prison because of his law-enforcement connections.

Benca said prosecutors have the option of a retrial on some of the charges.

Prosecutor Will Feland said his office intended to review the order and chart a course later.