The focus of this website is the murders of Kevin Ives and Don Henry, however, the backstory of the CIA's involvement is essential to understand that there are no boundaries, no party lines, and no more denying.

The remarkable White House correspondent, Sarah McClendon, who covered presidential politics for 50 years, baited Bill Clinton at a news conference on October 4, 1994, into admitting that he knew about Mena, which, as governor of Arkansas, he denied its very existence.  We now know that then-Governor Clinton provided protection and was duplicit in covering up the cocaine smuggling and money laundering operations used to raise funds for the Nicaraguan Contras.

In October, 1987, a plane belonging to the CIA was shot down in Nicaragua by a communist Sandinista missile.  The plane was loaded with weapons to be delivered to the Nicaraguan freedom-fighters, who were being supported through CIA covert operations at the behest of President Ronald Reagan.  This incident broke one of the ugliest foreign policy secrets in American history, the Iran-Contra scandal.  The illegal operation, which included drug-smuggling, gun-running, and money-laundering was set up by Vice President George H. W. Bush. The inner city of Los Angeles, California was targeted for raising funds by selling crack cocaine. While at a small airport in rural  Mena, Arkansas, the notorious smuggler Barry Seal was given protection by Governor Bill Clinton to continue his drug-smuggling, gun-running, money laundering operation but now as a DEA informant and a CIA contract pilot, also set up by Bush.

The crimes of Reagan, Bush, and Clinton, including reckless disregard for human life, are well documented, indisputable, and certainly not justifiable as evidenced by the extreme efforts of these presidents to keep their involvement secret.  Even though the liberal and conservative mainstream medias have managed to quieten an otherwise outraged public with lies, the legacies of these presidents will not exclude their crimes, as they had hoped. 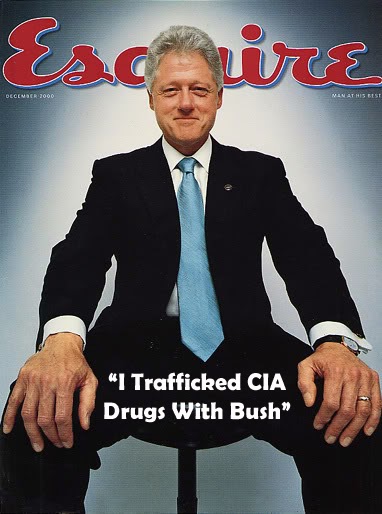 Linda and I have been called crazy for decades and for many reasons, but time has proven us right on every point:  Dan Harmon was an out-of-control drug dealer, was on the tracks with the boys when they were killed, and lead a sham investigation of the murders as witnesses turned up dead;  Jay Campbell and Kirk Lane (now the Arkansas Drug Czar) are the prime suspects in the hands on killing of the boys;  6 shutdown investigations of Saline County were systemic from the local through the federal level, which paralleled the systemic shut down of 6 investigations into the crimes of Mena.

Back then, we were called crazy for suggesting there was anything illegal going on in Mena, and certainly we were crazy for connecting the murders to Mena.  Now, only morons dispute that Mena was the hub of a drug-smuggling, gun-running, money-laundering operation taken over by the CIA when Barry Seal sought a deal from Vice President George H. W. Bush to stay out of prison.  The deal was made and Seal continued his operations as an agent for the CIA and and informant for the DEA.  After Seal’s assassination in 1986, the CIA continued the Mena operations that funded and supplied the Nicaraguan Contras at the behest of President Ronald Reagan and under the protection in Arkansas by Governor Bill Clinton’s state police.

The consequences of Reagan’s financial support of the communist-fighting Contras, was our nation’s saturation of cocaine.  It all came to a sudden halt when Seal’s C-123k military cargo plane carrying a load of guns to the Contras was shot down in Nicaragua by a Sandinista missile.  The denials started flying from every direction, but this event began the Iran-Conta affair and as time passed and responsible journalists investigated, deniability became impossible. Time will inevitably correct the legacies of 3 U.S. Presidents.  Call me crazy, but we’ll see.

The End Did Not Justify The Means.

“The end justifies the means” is quoted to justify an immoral or even criminal method used to achieve a desired result.  The “means” used by the CIA was the saturation of cocaine in our country.  President Reagan’s desired “end” was to finance the Nicaraguan Contras in their fight for democracy. This was accomplished, but the disregard for the inevitable result, our country’s crack cocaine epidemic, was not justifiable.  Tens of thousands of families were destroyed, in spite of Nancy Reagan’s “Just Say No” campaign.  It seems the Reagan’s were in conflict.  While she was saying, “Just say no.”  He was thinking “Just fly low.”  If the citizens of our country had been informed by a responsible mainstream media, we would never have allowed the means  nor the end, yet mainstream media has managed to contain the outrage, with a bipartisan consensus to quash the story.

1977 – Federal authorities, DEA, FBI, and CIA were watching Barry Seal as he set up his drug smuggling operation in Mena, Arkansas.  Some believe he was already a DEA informant.

1979 – The “Sandinistas” were declared the ruling party in Nicaragua, while small rebel groups started forming.

1981 – The CIA begin coordinating rebel groups to form the “Contras.”

Late 1982 – Barry Seal makes deal with DEA and CIA and increases his smuggling operations at Mena.

1983 – The CIA begin to smuggling drugs into Los Angeles.

Feb 19, 1986 – Barry Seal was assassinated just before he was supposed to testify at the trial of Colombian drug lords Pablo Escobar and Jorge Ochoa of the Medellin Cartel.

After Seal’s murder, the CIA continued operations at the Mena airfield.

Oct, 1986 – Eugene Hasenfus was shot down by a Nicaraguan Sandinista missile while flying one of Seal’s C-123k military cargo planes carrying weapons to the Contras. This broke the Iran-Contra scandal, yet the operations at Mena continued

Aug 23, 1987 – Kevin Ives and Don Henry stumbled on a drug drop while walking down the railroad tracks in rural Saline County, Arkansas.  They were murdered, placed on the tracks, and run over by a train.

Jul, 1995 – “The Crimes of Mena” by Sally Denton and Roger Morris was published

Before the Mena Connection Was Made.

After the Mena Connection Was Made.